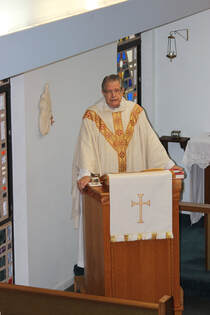 HOMILY
Easter Sunday
April 4, 2021
There are many ways to tell the Easter story. Today, let us imagine we are disciples of Jesus Christ, and that we are in Jerusalem. It is the third day after our Lord was scourged and crucified and died. Passover has come and gone. The sun is shining and faithful pilgrims, from all over Judea, are preparing to go back to their homes, and they have smiles on their faces – but we have no smiles on our faces. We are gathered in fear and desperation and are trying to comfort each other. We are trying to come to grips with life, in a world, without our teacher and Lord.
Peter stands up and begins to speak, “My brothers and sisters, I watched Jesus die on the Cross and I was gripped with a strange thought. I thought that even in death He seemed more alive than the rest of us! It was a strange thought, but now we must face the fact, that He is dead and gone, and all our wishing, cannot not bring Him back to life. Where do we go from here? The last three-and-a-half years have been incredible and none of us will ever be the same, but we failed Him, didn’t we? Every one of us betrayed and denied Him. None of us could even watch an hour with Him in the Garden of Gethsemane when He needed us the most.
“Now we need Him, and He is gone, and I do not know what any of us are going to do. Andrew, I suppose you and I can go back to our fishing boats; James and John, you can do likewise. But what about you, Matthew? You certainly cannot go back to collecting taxes. In one way or another, we all have the same problem. Jesus set our course and taught us to be ‘fishers of men’, but now He is gone, and our boat is floundering. We can try to do what He told us to do, but how can we be ‘fishers of men’ when we do not have any good news to tell them?
Peter pauses for a moment, and suddenly there is a knock on the door. The Apostles and disciples are fearful. Perhaps the Roman soldiers are rounding up the rest of Jesus’ followers, and now have come to seize them. Andrew opens the door a crack and Mary Magdalene steps in. She is out of breath and Andrew quickly shuts the door. Peter is the first to speak, “Mary, what happened? You look frantic. Are you alright?” Mary tells them what she has seen – the tomb where Jesus was laid is open, and his body is gone! Peter gasps, “What? The tomb is open, and his body is gone? Come John, we need to go quickly, and see for ourselves.”


Peter and John, followed by Mary, run through the city streets, out the Damascus Gate, and on to the tomb where Jesus had been buried. Peter turned to John, “Mary was right. The tomb is open, and the body is gone. Who could have taken it? Certainly not the Sanhedrin, or the Pharisees, or the Romans. None of them would benefit from the body being taken. Caiaphas will certainly have something to say. He will probably put out a story about why the body is gone; he may even blame us, and we certainly do not need that. We better get out of here, and quickly. Maybe we should all go back to our homes until this settles down.” Peter and John leave the tomb. Mary, still weeping, remains at the tomb.
Now again, let us imagine we are disciples back in Jerusalem in the Upper Room. We are huddled with Peter and John, and we are trying to figure out what to do next. Suddenly Mary enters the room. She has returned from the empty tomb and, with tears streaming from her eyes, she tells us she has seen Jesus, and He is alive! Peter is stunned, “What? He is alive? That is incredible. First, we tried to cope with the tragedy of his death, and then with the apparent disappearance of his body, and now He is alive, but told you He will soon return to His Father! This is all too wonderful.”
Peter gathered his thoughts and spoke again to Mary and the disciples, “Death seems so final, especially his death. He said He would suffer and die, but that He would rise again on the third day. We heard his words, but we did not understand his meaning. However, now something is beginning to make sense, especially his words about his Father’s house having many mansions, and that He was going back to his Father, to prepare a place for each of us to be with him. This means there is hope for all sinners, even for those like me, who denied him three times in his hour of need.”
Peter’s words and actions, his doubts and faith, resonate with us today. Like Peter, we live in a world where people and events, all too often, cast doubts on our Lord’s life and on his teachings. Also, we live in a world that entices us, at every turn, to deny our Lord, as did Peter on the day of our Lord’s trial before Pontius Pilate. But the glory of our Lord’s Resurrection on that first Easter Day, is a testament to mankind, that all He said is true and that we may look forward to being held, for all eternity, in his loving and forgiving arms. On that first Easter Day, Christ’s Resurrection stirred hope in the hearts of Peter and the disciples; and on this Easter day, our remembrance of his Resurrection, stirs the same hope in our hearts. Christ has Risen! He has Risen indeed.
Amen and Amen..